Wednesday, November 25th, Hope of the Valley Rescue Mission will host the Great Thanksgiving Community Banquet at the HELP Center in Van Nuys. Tyrone Street will be blocked off at the corner of Victory in order to set up 1,000 seats banquet style. Onsite will also be a huge resource fair where those in need can receive essential services and goods.The Thanksgiving meal is being prepared by one of the finest caterers in the Entertainment Industry, Bruce’s Catering and sponsored by Keyes Motors.
All are welcome and transportation pick-ups are listed on the backside of the flyer attached. 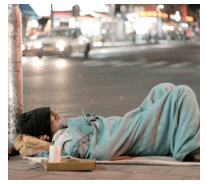 SPECIAL TO CITYWATCH-Sadly, the sight of people sleeping on the streets, begging strangers for money and scavenging for food in the trash has become all too common.

In Los Angeles County, an estimated 44,000 people are homeless on any given night, many of them families with children.

It’s a crisis that has been building for decades, driven by declining incomes and rising housing costs. As a result, a startling one in four Angelenos now lives in poverty.

Los Angeles County has half a million more very low-income households than available apartments so the typical monthly rent has skyrocketed 27 percent since 2000; however, the typical renter’s monthly income plunged 7 percent during the same period, partly due to the Great Recession.

These days, a typical household must earn about $80,000 a year to afford the $2,000 average monthly rent sought by landlords, and still be able to buy groceries, pay for utilities, and other expenses.

This means even preschool teachers, medical assistants, emergency medical technicians, paramedics, and many others with full-time jobs cannot afford to live in Los Angeles County. The most vulnerable – those with mental or physical disabilities and drug or alcohol addiction, and who lack family support – are the hardest hit.

The problem is particularly acute in Los Angeles County’s 2nd District, which accounts for about one-third of the County’s homeless population, according to the 2015 Homeless Count.

As Supervisor of the 2nd District, I have a moral imperative and political responsibility to make the fight against homelessness a priority, while recognizing that the effort will require going upstream on a deeply entrenched problem.

We have a good idea of what works – a humane and holistic approach that is also fiscally sustainable in the long term, aimed not only at housing the homeless but preventing people from becoming homeless in the first place.

Since the beginning of my tenure at the Board of Supervisors in 2008, I have pursued a three-pronged strategy:

1) Building strong and coordinated crisis response systems to get people back on their feet.

2) Creating affordable housing with, if necessary, supportive services such as mental health and substance abuse treatments, and even job training and placement, in partnership with community-based organizations.

The Board of Supervisors’ most recent initiative set aside $4 million for teams of social workers and health professionals to go out into the streets of Skid Row and connect homeless single adults to housing and supportive services.

Separately, the Board of Supervisors redirected $7 million from underperforming County programs for homeless families, plus $10 million in other funds, to support the innovative Family Solutions System. Over the past year, it has rapidly rehoused 1,000 families, only 6 percent of whom have fallen back into homelessness.

More than 1,900 new affordable housing units have been constructed over the past six years in the Second District alone.

In 2013, $1 million in 2nd District funds jumpstarted the County’s Flexible Housing Subsidy (CFHS), giving homeless patients a path to independent living after their discharge from County hospitals. The subsidy has been so successful that the County now invests $4 million a year to keep it going. So far, 1,000 units have been made available and another 1,500 units are expected to be available by next summer.

An important tool for the CFHS is temporary residential options like Recuperative Care beds to care for homeless patients after they leave hospital. About $1.8 million has been invested in renovating and operating 40 recuperative care beds in South Los Angeles. Another 100 beds will open at the Martin Luther King, Jr. Medical Campus in December 2015.

We are also expanding Psychiatric Urgent Care Centers to reduce the pressure on Psychiatric Emergency Departments. We opened another such center at the MLK campus in 2014, and are renovating another in Culver City that will open in December 2015.

In addition, we are chipping away at income inequality and the disparity between wages and housing costs. The County’s Board of Supervisors has adopted policies to ensure County-funded construction jobs, such as those at the Martin Luther King, Jr. Community Hospital, go to local residents.

The Board has also adopted motions to ensure employees of County contractors, as well as homecare workers who look after our elderly and disabled, receive a just or living wage.

Given the magnitude of the homeless crisis, however, it is time to scale up.

The Board of Supervisors has approved an additional $51.1 million for homeless prevention and affordable housing programs, in addition to the $50 million previously allocated in the 2015-2016 County budget. It is critical that the County reflect its commitment by dedicating ongoing funds to address this crisis.

The County Chief Executive Officer recently launched a Homeless Initiative that, in partnership with the 88 cities that comprise the County, will look beyond traditional solutions and the usual funding sources to develop a comprehensive strategy. The Board of Supervisors is poised to consider these proposals immediately.

Indeed, we encourage all 88 cities to take part in the Homeless Initiative in any way possible. Cities have the authority, for example, to protect existing housing through stronger rent control enforcement and by clamping down on unscrupulous landlords and developers — both of which would aid in stabilizing rents and housing costs.

There are new tools at our disposal, including the Affordable Care Act, which will help connect more people to needed health and mental health services, and Los Angeles County’s new Office of Diversion and Reentry, which will provide low-level offenders with the support they need to avoid homelessness and become stable and productive members of society.

Combatting homelessness is not for the faint of heart. I know we cannot extinguish homelessness but significant progress can be made with real and thoughtful partnerships among the government, business, philanthropic and nonprofit sectors.

It must be stressed, however, that our success will depend on our collective commitment to solving what is an undeniable and deepening crisis.
(Supervisor Mark Ridley-Thomas represents the 2nd District for the County of Los Angeles.) Prepped for CityWatch by Linda Abrams.
CityWatch, Vol 13 Issue 94, Pub: Nov 20, 2015 To read more City Watch, click here. 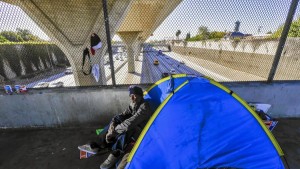 Mayor Eric Garcetti on Wednesday ruled out declaring an immediate state of emergency to address Los Angeles’ homelessness crisis, cutting off for now an avenue designed to bring swift relief to thousands of people as El Niño storms are expected to bear down on Southern California beginning in January.

An emergency declaration had been viewed as a novel — though far from assured — strategy for seeking more federal and state emergency funds and for gaining flexibility to deal with the city’s growing homelessness. Such declarations are generally reserved for natural disasters, but backers argued that with the threat of historic rainstorms, the idea merited consideration.

The City Council on Tuesday moved to lift some restrictions on sheltering homeless people — while officials continue to debate longer-term solutions.

The council’s actions could add beds to the city’s winter shelter program and open public buildings as new shelters, as well as authorize homeless people who live in cars and RVs to sleep in church parking lots.

But the council did not say where the money would come from, or how it would be spent, and it could be months before the city’s 26,000 homeless people feel the policies’ benefits… click to read more

One a single night of this year, 564,708 people were experiencing homelessness in across the country. This is according to the 2015 Annual Homeless Assessment Report to Congress (AHAR) Part 1, which was released today by the Department of Housing …

Is homelessness in the U.S. increasing or decreasing? Are there more homeless children today than this day last year; this year than three years ago? There are two primary data sources on U.S. homelessness: the U.S. Department of Housing and Urban De…

Now that topline federal spending levels have been increased, your voice as a homeless advocate is as important as ever.

Here’s where we’re at in the federal funding process.

Public buildings in Los Angeles would be used to shelter the homeless under a plan that won preliminary approval by the City Council on Tuesday after…
Read more: Los Angeles Homelessness, Homelessness, LA Homeless Plan, Poli…