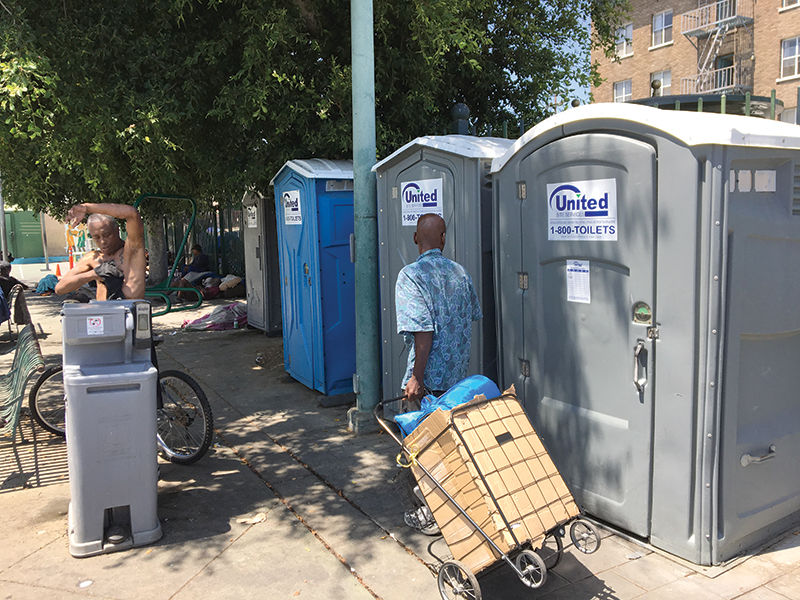 Skid Row got a mobile restroom last week. Now that program will be expanded. ; Credit: Andres Aguila/KPCC
Rina PaltaThe city of Los Angeles will launch a pilot program bringing mobile restrooms for the homeless to four sites across Los Angeles. 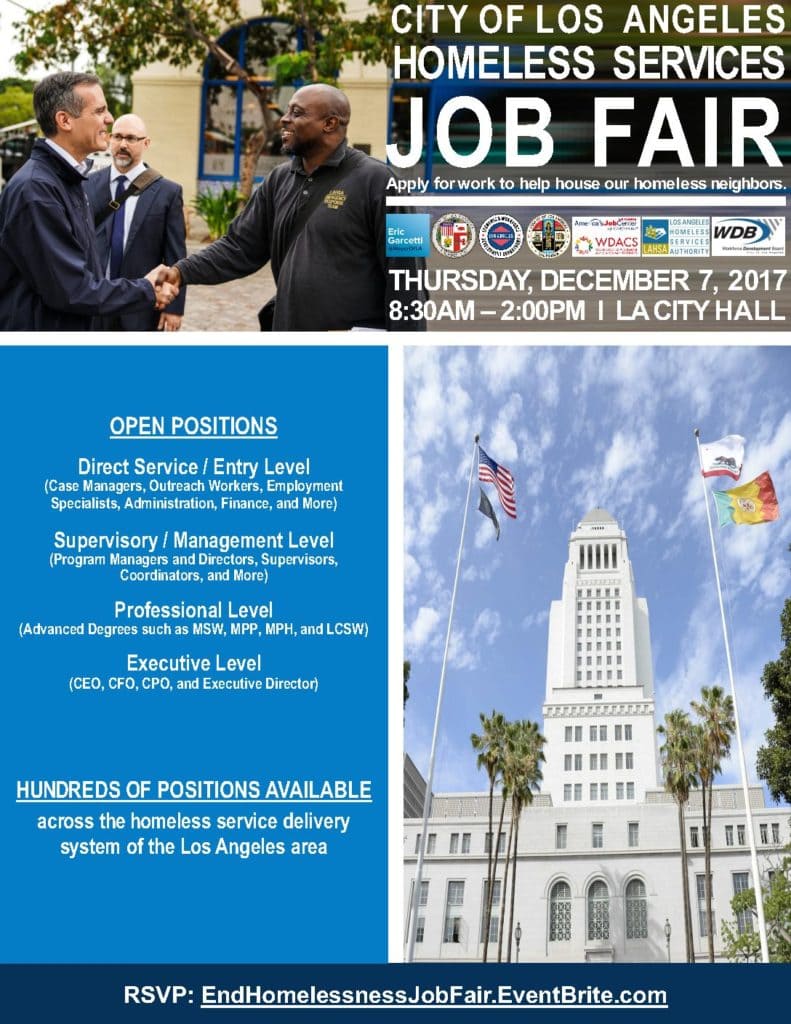 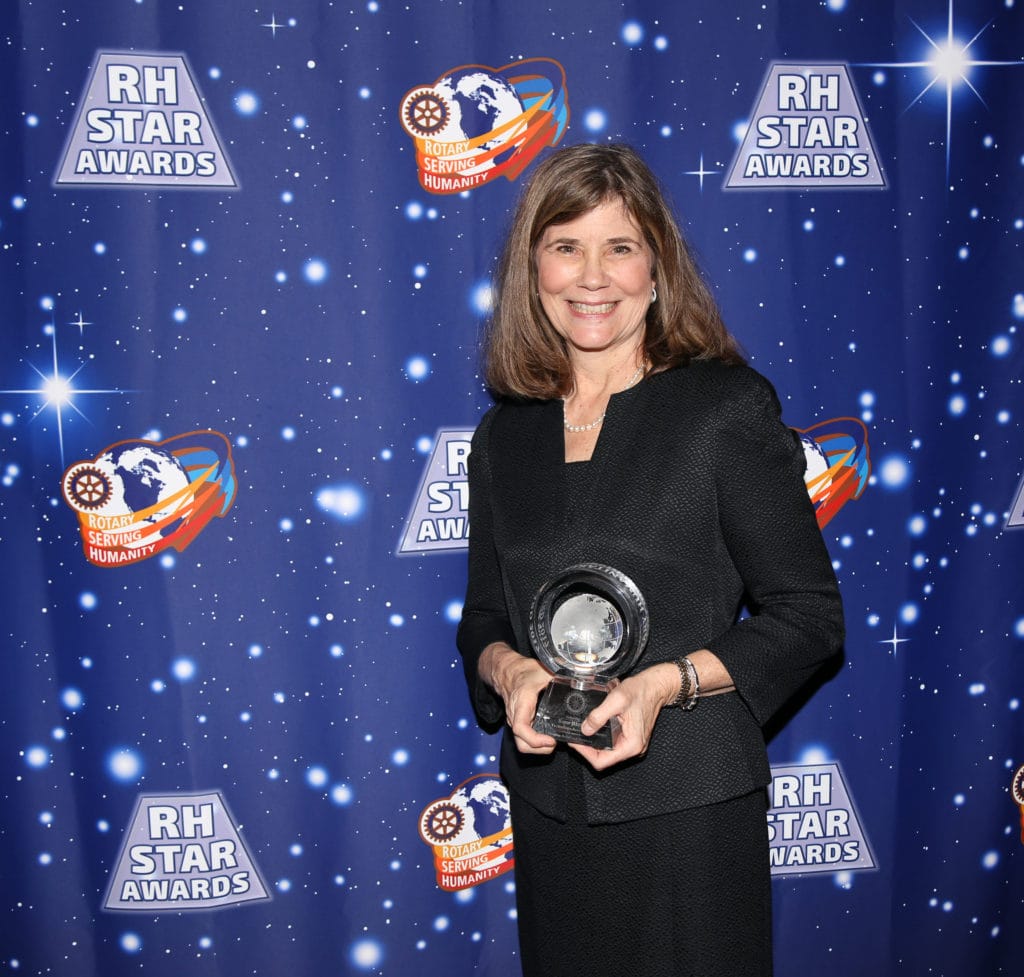 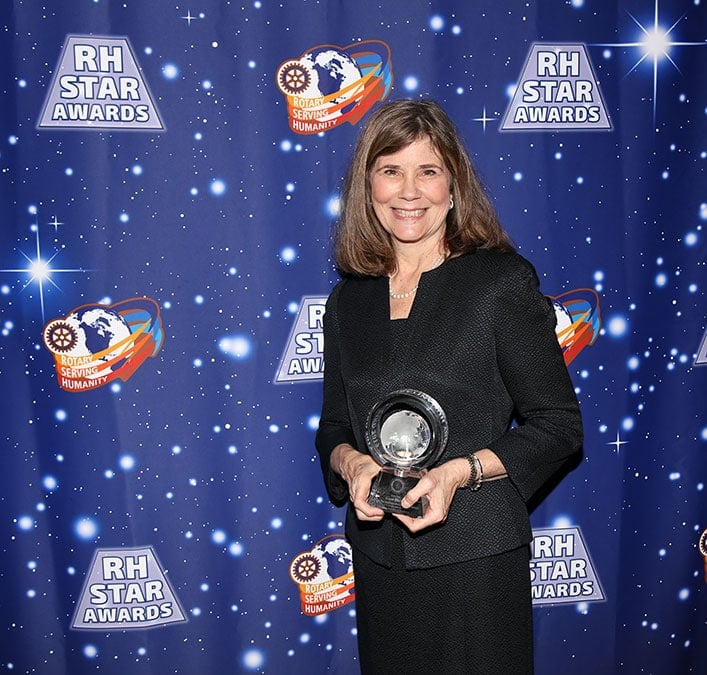 On 1.04.17, Our Community LA Founder and President, Dr. Denise McCain-Tharnstrom,  was honored to accept the Rotarian STAR Humanitarian of the Year Award for Knowledge Sharing. Dr. McCain received this award for her visionary leadership and development of the WIN mobile application, which uses mobile technology to connect homeless and resource insure youth/adults to much needed services.

The Knowledge Sharing ward recognizes individuals or teams who have, through scientific or technological discoveries, significantly improved our ability to share knowledge for human benefit or who have made scientific or technological advances in order to improve or save lives. Winners of the STAR award were selected by an outside panel of distinguished advisors: Dr. David A Bearden, Dr. Joel W Burdick, Dr. John F. Raffensperger, Dr. Phillip R. Troyk, Dr.  Marie Csete, Dr. Sylvia Whitlock, The Honorable Lance A. Ito, and Dr. William C. Patzert.  The Rotary Club of Sierra Madre, embodying the pursuit to serve humanity, offers the Rotary Humanitarian STAR Awards to honor and bring to light achievements that support, advance and inspire humanitarian accomplishments.

The WIN app, developed by Dr. McCain and the OCLA team, leverages youth and adults trust in technology, the availability of free internet and cell phone providers offer of free Lifeline phones to homeless or low income individuals, to empower homeless, hungry and vulnerable populations to locate the supportive services they need. 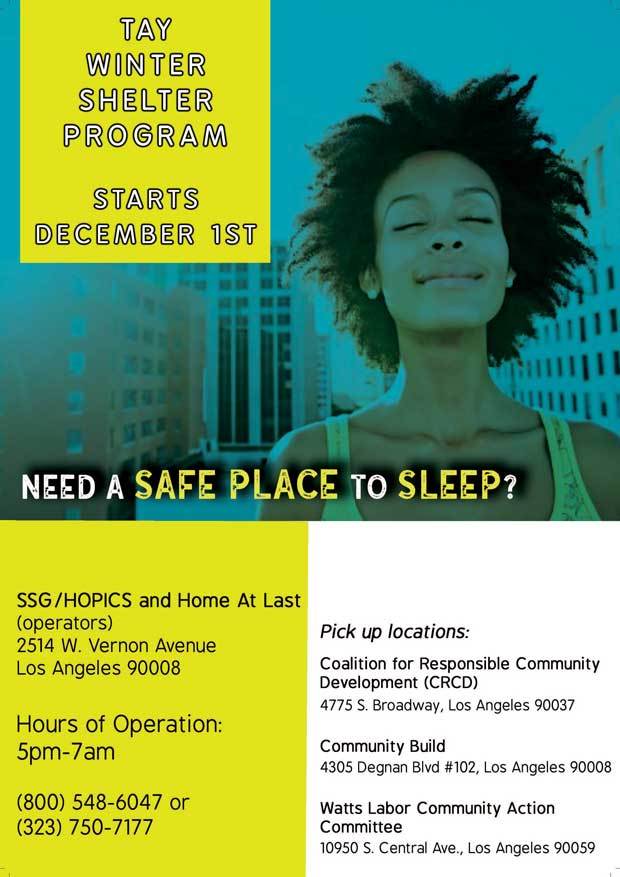 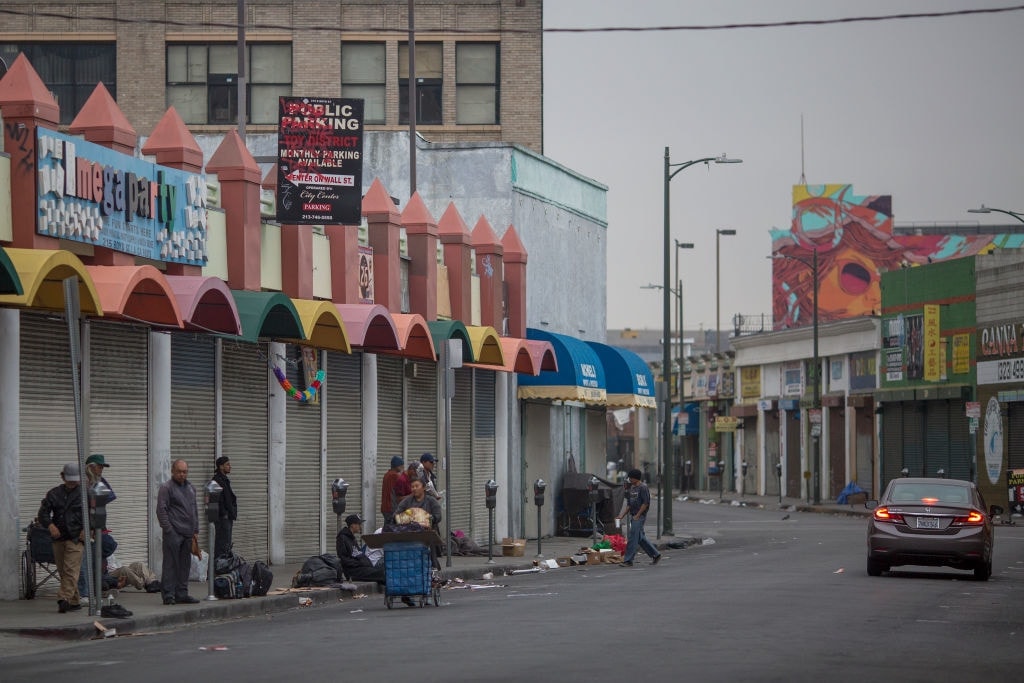 Proposition HHH passed a year ago, providing $1.2 billion in affordable housing funds over a decade. But an outstanding question has been if neighborhoods would accept construction projects.David McNew/Getty Images

The city of L.A.’s struggle to find willing neighborhoods for homeless housing developments hope they have something of a blueprint for success in a recently approved project in West L.A.

The development, 70 units in total with half devoted to permanent supportive housing for young adults and families, is slotted on the site of a formal animal shelter in the Sawtelle area. The area’s neighborhood council recently approved the project after months of outreach by Councilman Mike Bonin’s office and the developer, Thomas Safran & Associates.

The news comes on the anniversary of the passage of Proposition HHH, a $1.2 billion bond measure passed by city voters to fund low-income housing.

And advocates are hoping the development’s success so far portends success for hitting the measure’s goal of constructing 10,000 units in the next decade. Neighborhood opposition to development is one of the major potential hurdles moving towards that goal.

“What we have to look at is staying on pace,” said Elise Buik, CEO of the United Way of Greater Los Angeles, which has been coordinating the region’s homelessness efforts for years.  “To get to 10,000, we need to make sure projects are coming online and getting approved and then we have to pay attention to the geography and where those projects are getting sited.”

Location is another reason the affordable housing community is excited about the West L.A. project. Traditionally, developers have had a tough time siting projects in more affluent areas of the city.

A KPCC analysis found nearly two-thirds of affordable housing developments built in Los Angeles County over the past decade ended up in the poorest neighborhoods.

“We have homeless individuals living all across the city, so we want to make sure each neighborhood is doing its fair share,” Buik said. Solving homelessness, she said, doesn’t mean simply getting homeless people out of the neighborhood.

So far, the city has approved funding through Proposition HHH for 412 new housing units. The average, before HHH passed, according to the United Way, had been about 300 per year.

The United Way is gearing up to embark on a county-wide marketing campaign to combat so-called NIMBY-ism (Not-In-My-Back-Yard) and pave the way for affordable housing developments.

“Once people understand what the solution is and what it’s not, they really do come onboard,” she said.

In the case of the West L.A. proposal, Tyler Monroe, vice president of development for Thomas Safran & Associates, said the company started community outreach last spring. They held 10 community meetings, chartered busses so interested neighbors could tour similar developments in nearby neighborhoods and meet with residents, and underwent five special meetings of the local neighborhood council.

“We started by listening and understanding what the community was scared of and how we could address that with programming and design,” Monroe said.

Beyond NIMBY-ism, another threat to Proposition HHH’s 10,000-unit ambitions is the threat of changes on the federal level that could take out other pieces of funding affordable housing developers depend upon.

Federal budget proposals currently include major cuts to the Department of Housing and Urban Development, including, potentially, programs that fund affordable housing construction and rental subsidies for tenants.

The West L.A. proposal, along with other projects potentially set for funding through Proposition HHH would all have to make up that money some other way.

“That’s a big question,” Monroe said. “Right now we’re taking a wait and see approach. We believe that where there’s a will there’s a way.”

This is a KPCC story- read more here. 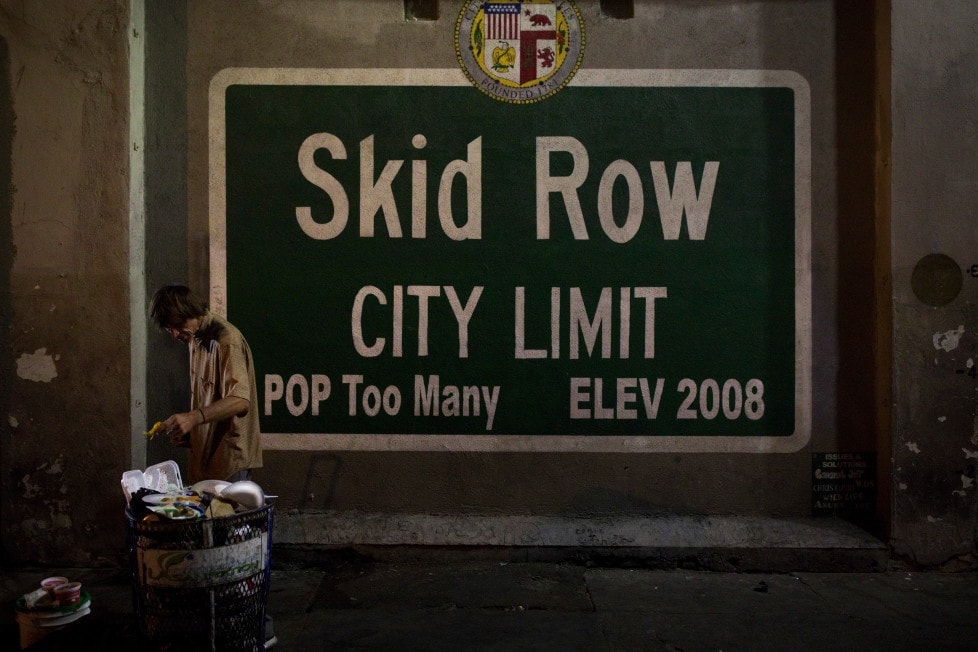 A homeless man takes food from a trash can in Los Angeles’ Skid Row area, home to the nation’s largest concentration of homeless people, Saturday, Oct. 28, 2017, in Los Angeles. At least 10 cities have declared official states of emergency, and California declared a statewide emergency due to a hepatitis A outbreak linked to homeless encampments. Comparisons are being made to conditions more commonly seen in Third World countries. (AP Photo/Jae C. Hong)

A homeless man takes food from a trash can in Los Angeles’ Skid Row area, home to the nation’s largest concentration of homeless people, Saturday, Oct. 28, 2017, in Los Angeles. At least 10 cities have declared official states of emergency, and California declared a statewide emergency due to a hepatitis A outbreak linked to homeless encampments. Comparisons are being made to conditions more commonly seen in Third World countries. (AP Photo/Jae C. Hong)

In an effort to limit the spread of hepatitis A among homeless people, four temporary toilet and handwashing facilities will be installed at some of the larger encampments in unincorporated Los Angeles County.

The Board of Supervisors unanimously approved the effort Tuesday after learning there were 222 homeless encampments identified across the County. In addition, officials with public health and the Los Angeles Homeless Services Authority conducted almost 880 surveys. After determining that encampments with 30 people or more needed toilets and handwashing facilities, sites in Palmdale, West Athens, Lennox, and West Carson were chosen.

RELATED: On LA’s skid row, toilets and dignity are scarce. A new hygiene center aims to change that

Ferrer said the toilets and handwashing facilities needed to be open for 24 hours, seven days a week, and would likely be available for six months, which is the time she and other health officials estimate the current hepatitis A outbreak will have concluded.

There have have been calls from the skid row community for years for more working toilets, sinks and showers in their community. A report this summer called “No Place to Go,” found that from 9 p.m. to 6 a.m. on skid row, there are nine public toilets available for 1,777 unsheltered homeless people.

“Even counting these nine public toilets, skid row is short of the United Nations sanitation standard by 80 toilets,” according to the report released by the Los Angeles Central Providers Collaborative.

“We found it’s not simply a question of the number of toilets but accessible toilets,” said Greg Spiegel, director of strategic initiatives at the law center during Tuesday’s Board meeting. “Functional means it has to flush. It has to be safe and it has to be private.”

RELATED STORY: LA County declares its own hepatitis A outbreak; 10 infected include homeless

The issue of  access to toilets and handwashing facilities came into sharper focus in September as a result of the hepatitis A outbreak that that has sickened 544 people and killed 20 in homeless encampments within San Diego County. In Santa Cruz County, 76 people, also within homeless encampments, have been sickened with the liver disease. Hepatitis A can be  spread person-to-person through close contact or through contact with environments contaminated with feces.

An outbreak was declared in Los Angeles County in September. As of Monday, there were 32 cases reported and no deaths. Of those, 15 cases appeared to be among homeless people and 17 among gay men who are not homeless.

Tuesday’s vote on a motion authored by supervisors Hilda Solis and Mark Ridley-Thomas also directs several county departments to look into adding mobile shower units, as well as partnering with cities to increase the number of hygiene centers.

“The good news is, through our efforts, we’ve been able to keep our infection rate low,” Solis said of the public health department’s efforts to provide free hepatitis A vaccine. “Lets’ try to stay this course in order to keep these numbers low. We need to stay on track. We need to continue our efforts on all fronts ”

“Fundamentally, we’re speaking the language of dignity and support for those who are homeless,” he said. “We are duty bound to attend to this with the kind of care it warrants.”

This story has been amended to reflect the proper name of the Los Angeles Central Providers Collaborative. 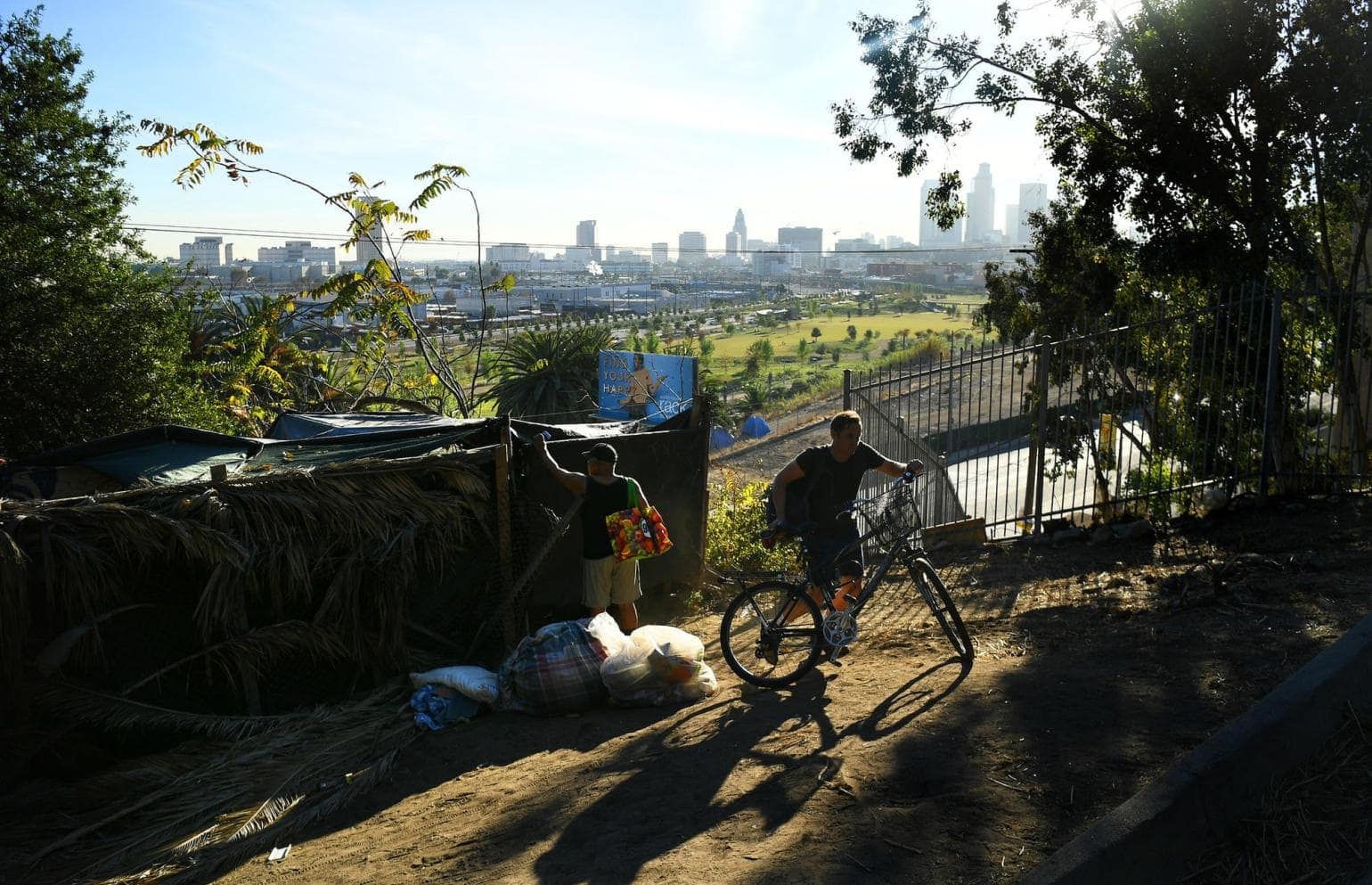 High above the Metro Gold Line tracks, a string of lean-tos that Lee Brown calls his “three-bedroom condominium” is tethered to a hilltop fence in Elysian Park.

The four-man, two-dog tent city — one of several camps in the 600-acre park north of downtown Los Angeles — has remained intact for at least two years, passed from one homeless person to the next, Brown said.

Funding for one strategy — camp cleanups or sweeps — expanded to $13 million. But spending on services for people living in the streets — mobile showers, housing navigation centers, storage facilities and homeless parking lots — lagged behind.

Read the full story on LATimes.com.