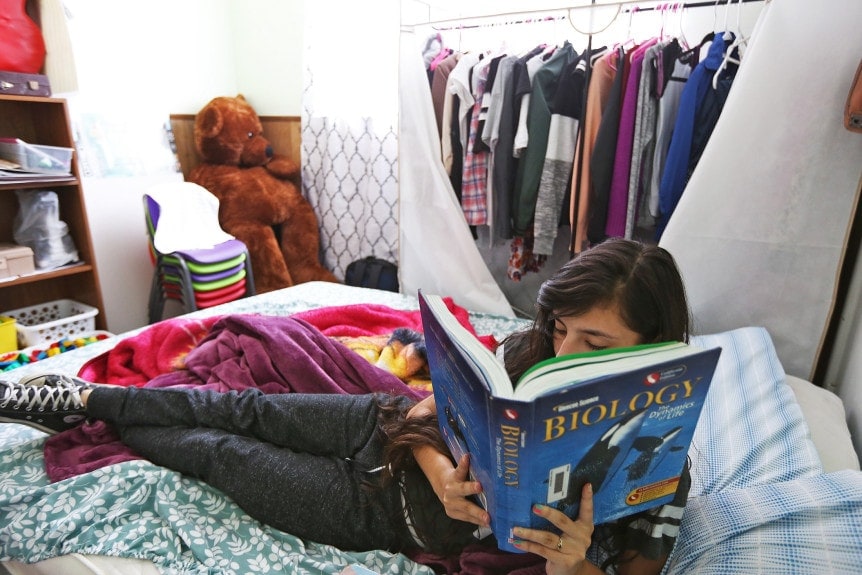 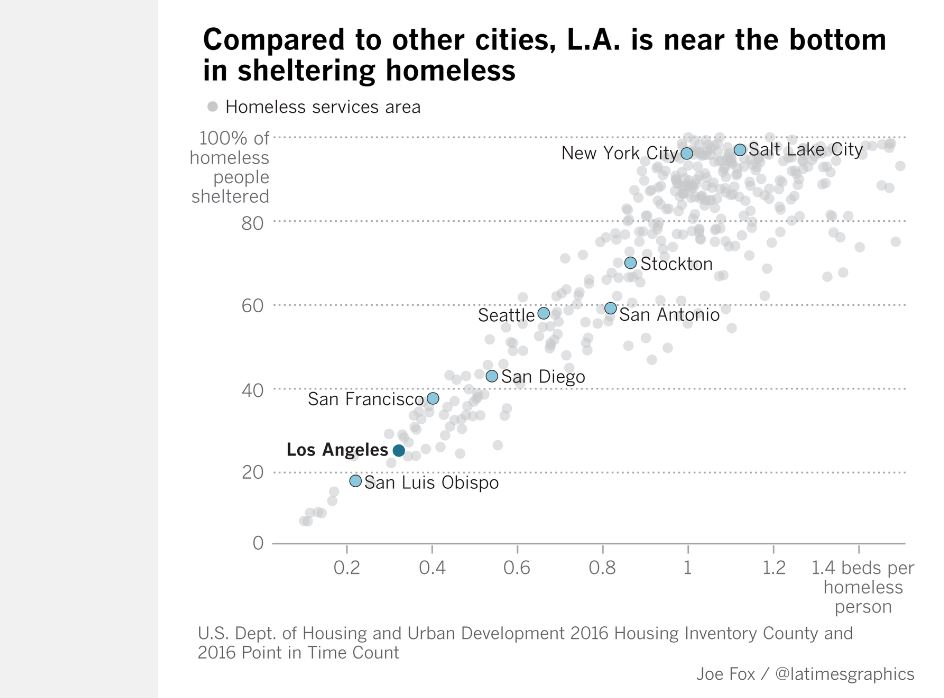 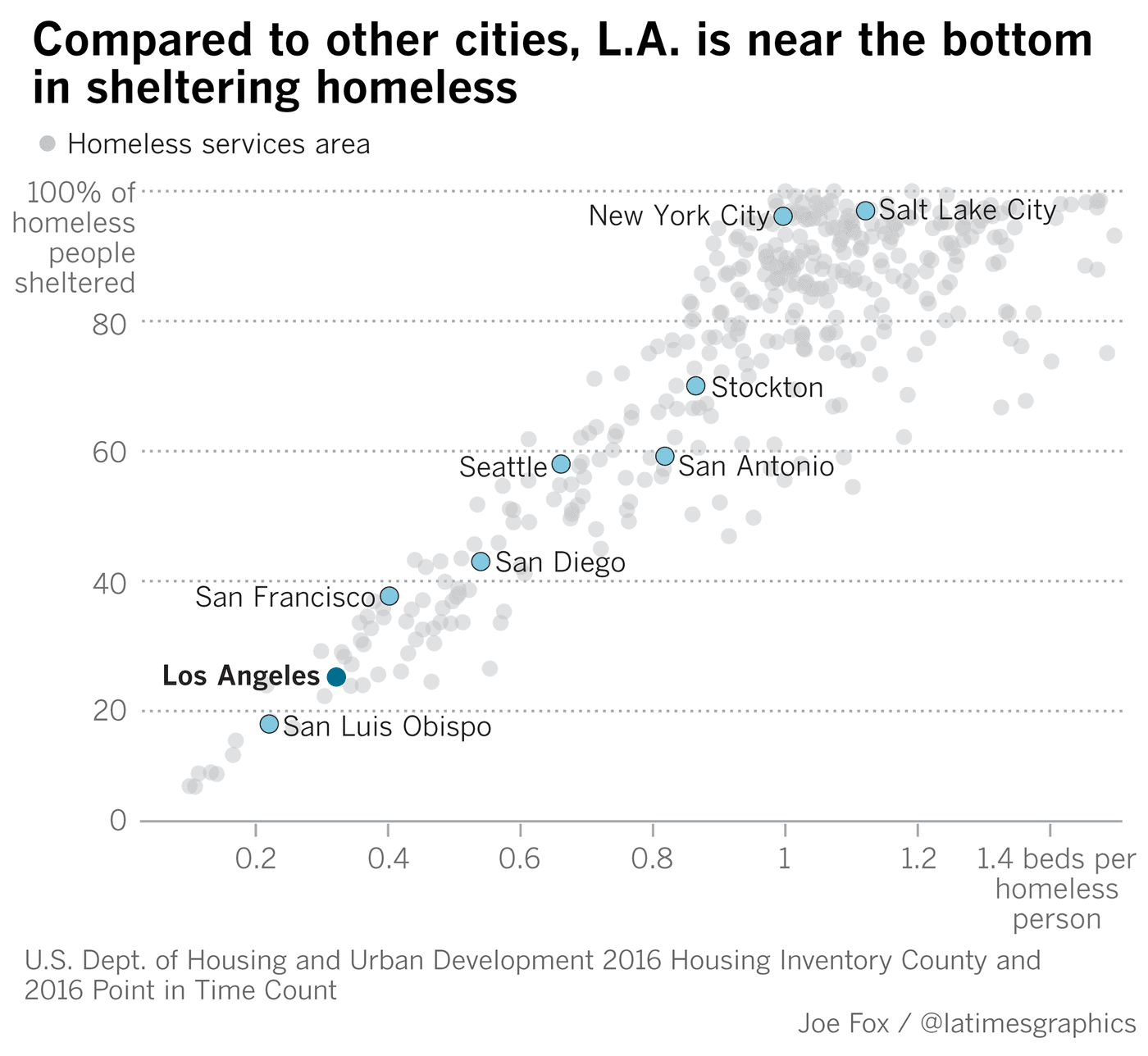 Some of the poorest people in the city spend their days in the shadow of Los Angeles City Hall, napping on flattened cardboard boxes.

On any given day, as many as 20 people take to the City Hall lawn, across the street from LAPD headquarters. They’re there to “escape the madness” in downtown streets, a 53-year-old homeless man named Lazarus said last week. At night, they fan out to doorways or deserted plazas to wait for daybreak.

The growth of a homeless day camp at the halls of civic power speaks to the breadth of Los Angeles’ burgeoning homelessness problem.

The number of those living in the streets and shelters of the city of L.A. and most of the county surged 75% — to roughly 55,000 from about 32,000 — in the last six years. (Including Glendale, Pasadena and Long Beach, which conduct their own homeless counts, the total is nearly 58,000.)

Three out of four homeless people — 41,000 — live in cars, campers, tents and lean-tos, by far the biggest single group of unsheltered people in any U.S. city. If you took out Los Angeles, national homelessness would have dropped last year for the first time since the recession.

People left behind by the economic recovery can’t compete with young professionals who have bid rents up to record levels.

In another era, they might have found refuge in crumbling hotels and tenements. But many of those buildings were lost in the city’s post-recession spree of building, evictions and renovations.

The problem has only gotten worse since Mayor Eric Garcetti took office in 2013 and a liberal Democratic supermajority emerged in 2016 on the county Board of Supervisors.

Tent cities stretch from the Antelope Valley desert to the Santa Monica coast, with stopovers in unlikely communities — even Bel-Air, where a homeless cooking fire was implicated in December’s Skirball fire.

During an October hygiene survey, county public health officials identified 222 encampments, including 50 with 30 or more people living in them. These ragtag outposts have altered the basic terms of urban life.

People in Koreatown step outside their fancy condos to find tents, rotting food and human feces at their doorsteps. Buses and trains have become de facto shelters, and thousands of people sleep in fear and degradation.

Officials and philanthropic groups have been housing more homeless people than ever before — 26,000 between 2014 and 2017. But L.A. has a severe housing shortage, and city and county homeless programs have been slow to start and too limited to absorb the waves of people forced into the streets.

Officials are hoping reinforcements will breathe new life into the effort to end homelessness. Over the last 16 months, voters have agreed to tax themselves $4.6 billion to build housing — 10,000 units in 10 years — and provide supportive services for homeless people. A long-delayed developer fee that’s expected to pump out $100 million annually for affordable housing was finally adopted, although some observers wonder whether it comes too late to capitalize on the building boom.

The county money started flowing in October; officials have quadrupled homeless outreach teams, added 600 shelter beds, expanded winter shelter hours and ramped up hotel vouchers. Some 1,000 new employees are being hired at every level of homeless services, including support for people in the new housing projects.

“The reason I’m optimistic … are the unprecedented resources,” said Garcetti, who has been criticized for moving too slowly. “You’ve got to make sure you’re not just pushing the problem from place to place.”

“To project nearly $5 billion in revenue over the next decade shows substantial resolve and an undeniable commitment,” said Los Angeles County Supervisor Mark Ridley-Thomas. “The people of this region and their leaders [have] relocated their moral compass.”

But the crisis has been decades in the making. If homelessness continues to escalate at current rates, it will swamp even the best efforts.

“We are moving more homeless families and adults into housing,” said Phil Ansell, director of the Los Angeles County Homeless Initiative. “What we have less control over is the inflow: people who simply are unable to pay the rent. 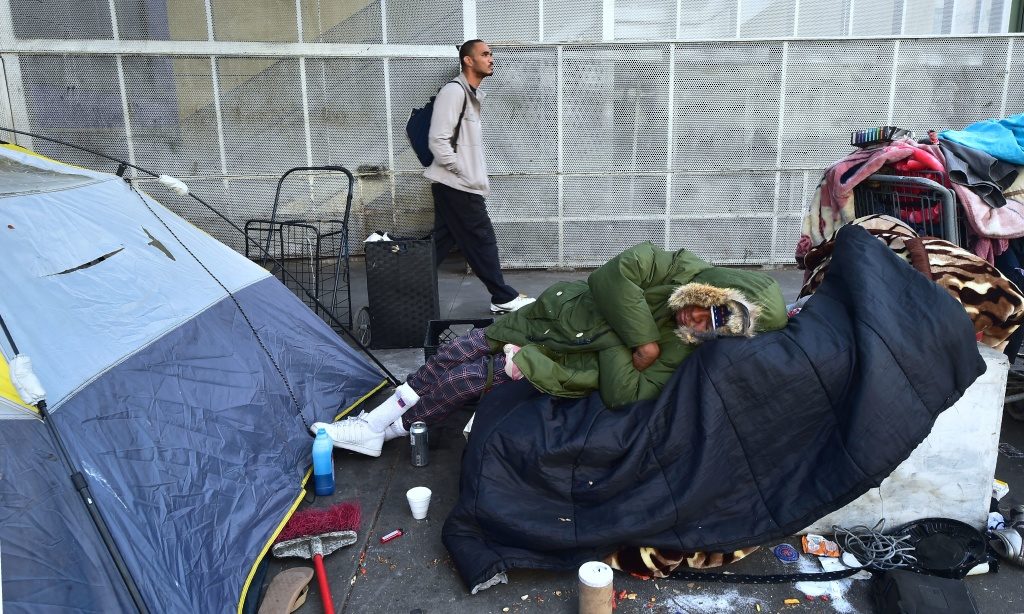 File: A homeless woman sleeps on a pile of belongings on the street near the Los Angeles Mission, hosting its annual Christmas meal for the homeless on Dec. 22, 2017 in Los Angeles.; Credit: Frederic J. Brown/AFP/Getty Images
APMayors from Californ… 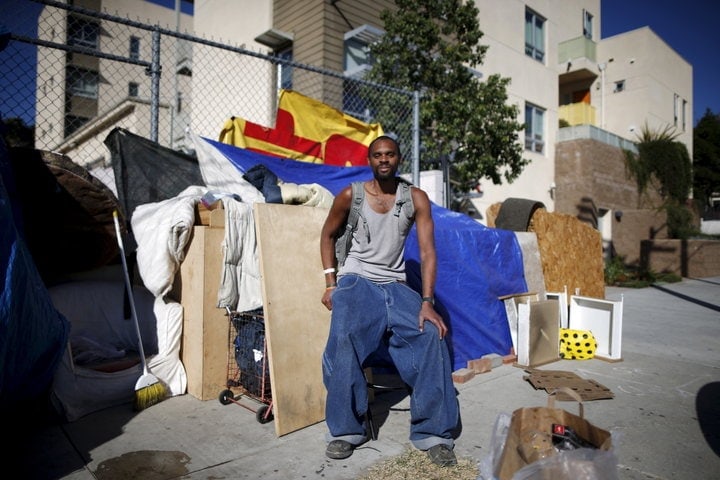 “When people are struggling so much just to afford their homes, they’re suffering in a multitude of ways.” 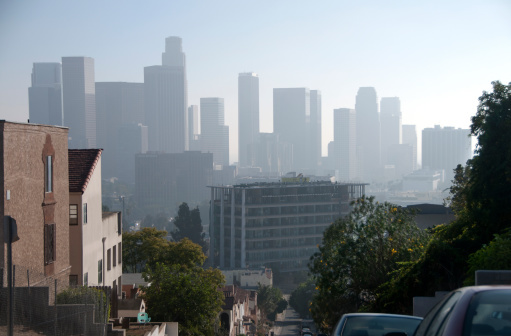 The housing affordability crisis in LA is worsening, and officials are looking at easing some regulations and adding others to try to beef up the housing stock.; Credit: Mitch Diamond/Getty Images
Rina PaltaL.A. County officials, looking to address… 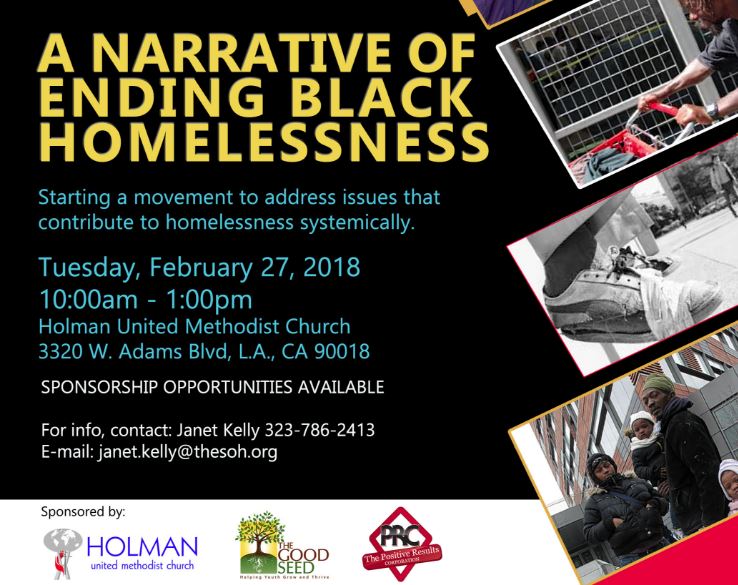 Black History Month celebrates Black American achievements and underscores the vital role our Black Brothers and Sisters play in America’s past and our future. But too many of LA’s black youth and  adults are experiencing  homeless or facing daunting barriers connected to poverty.  On February 27th, Sanctuary of Hope is hosting a community event around the narrative of  Ending Black Homelessness in LA. 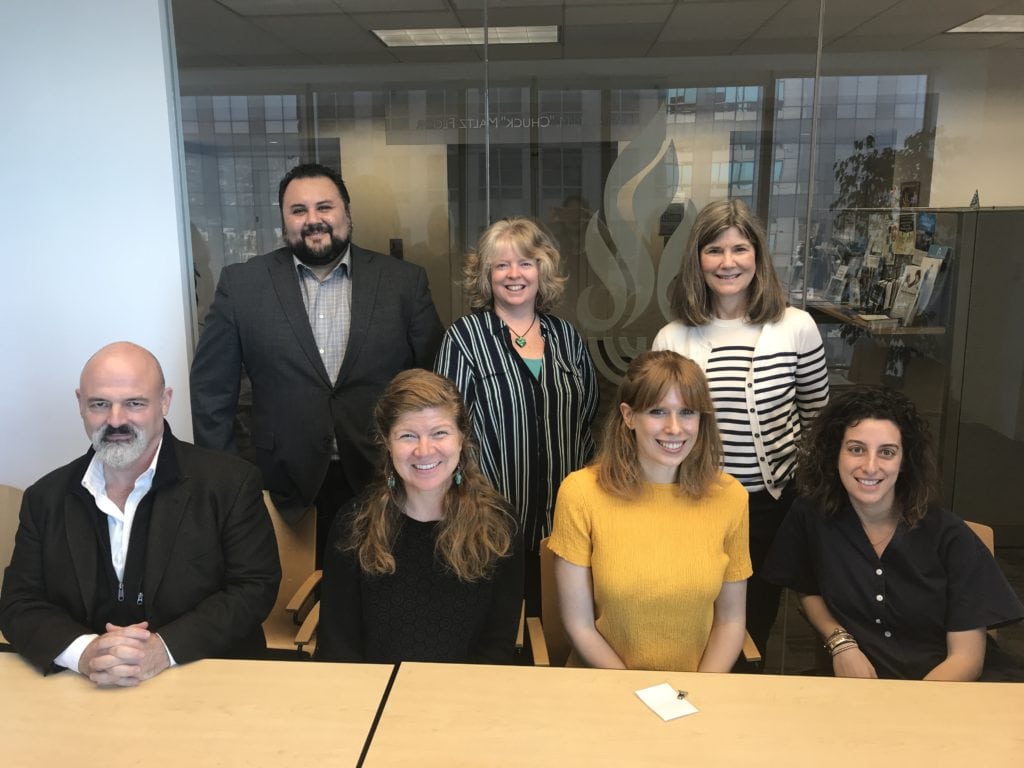 A HUGE thank you to the  Jewish Federation of Greater Los Angeles  and the Executive Service Corp for partnering to provide to innovative  leadership training to Our Community LA our fellow 2018 ChangeMaker Challenge cohort.  – We are so proud and excited to be chosen to be part of this learning group! 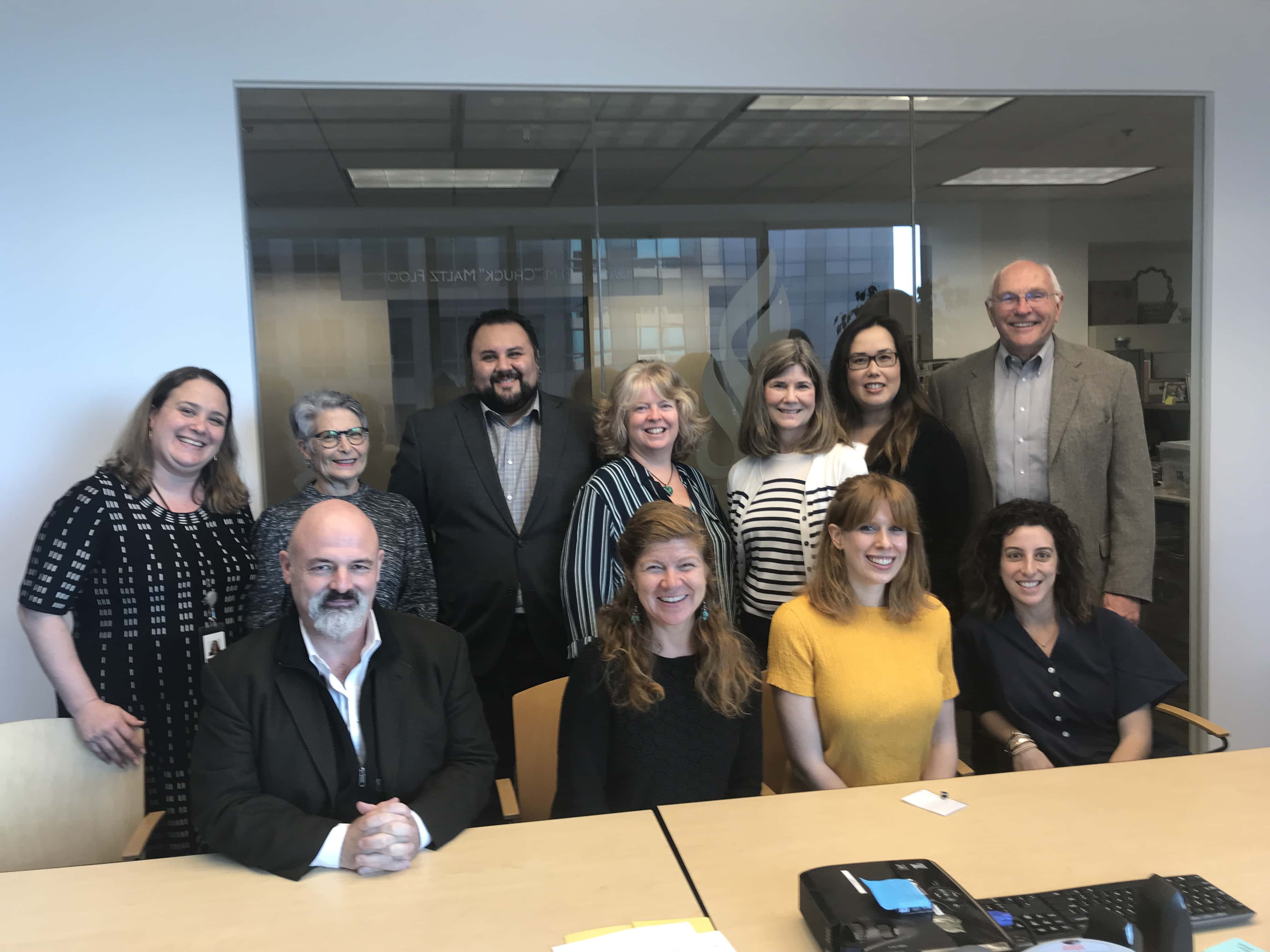 ; Credit: John Osborn D’Agostino, CALmatters
Matt Levin | CALmattersNo one has the exact same definition of the California dream. Ask the 39 million current Californians about what the dream should be, and aside from most of us agreeing that the da…

The Olvera Street, L.A.’s historic pueblo, is near the site of a proposed temporary shelter for homeless. ; Credit: Dorian Merina/KPCC
Rina PaltaA plan to place temporary housing for homeless in a lot near Olvera Street in Downtown L.A. moved forwa…