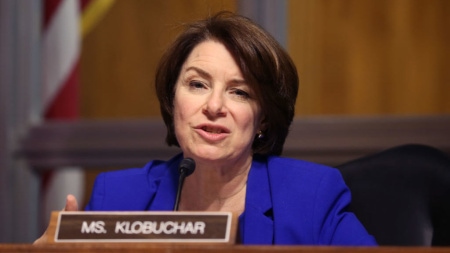 In an effort to reduce crime among formerly incarcerated individuals, a bipartisan group of Senate and House lawmakers are joining forces to introduce legislation Thursday to create new resource centers to help ex-prisoners get a new start. Sens. Amy Klobuchar, D-Minn., and John Cornyn, R-Texas; and House Reps. Karen Bass, D-Calif., and Guy Reschenthaler, R-Pa., are launching the proposal to offer new access to housing, medical care, job searches and legal services. Bass and Reschenthaler introduced the One Stop Shop Community Reentry Program Act during the previous legislative session, where it was passed by the House. However, it failed to get traction in the Senate, where it now has a new set of bipartisan sponsors to introduce it for the first time. “This bipartisan legislation would help reduce the chance that people transitioning from incarceration will reoffend by creating resource centers to coordinate access to job training, medical and mental health services, and financial counseling,” said Klobuchar, a former prosecutor in her home state. The bill, introduced in the lower chamber last September, passed by a House voice vote in December. Now, its sponsors are hoping new momentum will get the measure over the finish line as policing and criminal justice reform draw closer scrutiny this year. Lawmakers say the plan would reduce offenses among newly released prisoners who struggle without access to critical tools. The national average rate of crime after leaving incarceration, also known as the recidivism rate, is 49.3% during an eight-year period, according to the U.S. Sentencing Commission. “Newly released offenders often aren’t aware of the resources available to them and struggle to find jobs, housing and mental health services,” said Cornyn, a former Texas state attorney general. Justice Department grants to set up the reentry centers would help former inmates get back on their feet, Cornyn added. The centers would also help individuals land jobs, gain job-skill training, obtain driver’s licenses, fill out college and student loan applications and receive financial counseling. “The expectation that individuals are successful and won’t reoffend after being given $10 and a bus ticket is absolutely ridiculous,” said Bass, who is part of another bipartisan group of lawmakers hoping to land a deal on a major policing bill this year. Reschenthaler lauded his bipartisan measure with Bass and other lawmakers, saying he found as a former district judge that the best way to be “tough on crime” is to reduce the rate of recidivism. The plan “will end the revolving door between prison and the streets,” Reschenthaler said. Even as vast share of incarcerated individuals — 85% — are eventually released, they still face a long list of obstacles to reintegrate into society, Bass noted. For example, they face additional challenges finding work, places to live and landing quality education. Those shortfalls make it more likely to offend again, the lawmakers said. Copyright 2021 NPR. To see more, visit https://www.npr.org.