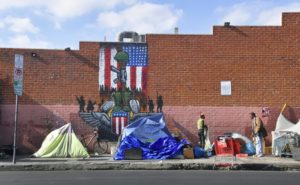 More than two years ago, in November of 2016, Los Angeles voters overwhelmingly approved Proposition HHH. The bond measure raises $1.2 billion to fund construction of homeless housing and service centers in the City of Los Angeles.

At the time, voters were promised the money would be used to finance the construction of 10,000 units of supportive housing for the most chronically homeless—people who in an another era would likely have been institutionalized.

“Unfortunately, the city is falling very short. Not that anybody expected that these units would be built overnight. But it has been more than two years and we have delivered zero of those units,” said Galperin to KPCC/LAist.

According to the controller’s office, more than $360 million dollars in bond money has been deposited into city accounts, but less than a tenth of the money has been spent.

That’s largely because the funds have been earmarked for a type of housing that is slow and costly to build.

The current strategy works like this: city officials supply housing developers with a “letter of commitment” for proposed affordable and supportive housing developments before actually disbursing the money from its accounts. Developers use the city’s commitment to partially fund a project as leverage to procure more funding from more sources.

According to a motion that will be considered in City Council’s homelessness and poverty committee later this week, $607 million of the $1.2 billion total has been “associated” with 26 facilities, totaling approximately 3,700 housing units.

The first three HHH-funded supportive housing projects, totaling 239 units, are expected to open later this year, according to the city’s Housing and Community Investment Department.

That’s consistent with the plan first pitched to voters back in 2016.

Galperin isn’t arguing that voters are being duped. Instead, he’s saying that given the severity of the city’s homelessness crisis, the finite amount of public money would perhaps be better used in other ways that provide more immediate relief.

Anxiety over whether or not the money is being used effectively is not unique to the City Controller’s office.

Last year, officials reporting to the oversight committee responsible for managing the use of HHH funds warned rising costs meant the L.A. might fall up to 4,000 units short of its initial 10,000 unit goal.

And then there’s the question of whether or not spending the money on supportive housing is the best use of limited funds since HHH money can used for a variety of purposes.

Besides supportive housing, it can also be spent on emergency temporary shelters, storage facilities, shower and bathroom facilities, and service centers for homeless people.

“What we want to do is find a way to get people into shelter as quickly as possible to relieve some of that suffering we see happening on our streets,” said Galperin.

Annual audits of HHH money by the controller’s office of are required by law if funds remain unspent at the end of the fiscal year. The office has retained a third party firm to conduct the audit, which will occur in following months.

Community groups and homeless advocates, particularly the Los Angeles Community Action Network, have been advocating for an audit for more than a year.

“We have more than $600 million of HHH funds committed so far, with eight projects under construction, seven more that will begin construction this quarter, and thousands more units in the pipeline. The Mayor is also developing an innovative pilot program that will put 10% of the HHH budget toward finding ways to get housing built even faster. We appreciate the Controller keeping an eye on the City’s Prop. HHH expenditures, and look forward to continuing our work with him to make government work better for everyone.”