Home / News / L.A. Built a Tiny-House Village for Homeless Residents, and Some Aren’t So Sure About It

L.A. Built a Tiny-House Village for Homeless Residents, and Some Aren’t So Sure About It 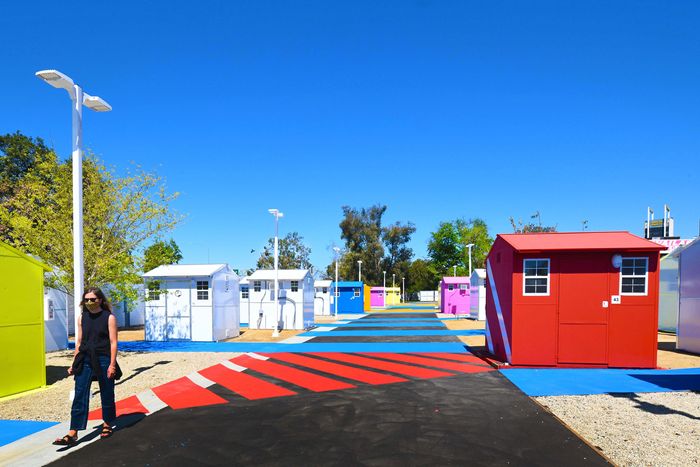 Like so many of the parks in Los Angeles County’s San Fernando Valley, Alexandria Park is little more than a sliver of grassy land along a concrete-lipped wash dotted with picnic tables, the landscaped embankment of a freeway onramp. Today, though, local officials are pointing to it with pride, as 103 tiny homes to be used as transitional housing for local homeless residents have opened in the park. At a press conference last Thursday, where Alexandria was called the “biggest tiny-home village in the state,” city leaders milled about this mini-neighborhood, which has been laid out with the precision of a suburban subdivision, with a dozen or so homes painted in neon yellow, hot pink, and red diagonal stripes to create a disarmingly charming effect. It is the second such site in L.A.; another tiny-house village opened in February two miles to the southeast, and a third is under construction near Echo Park Lake with several more to come. But unlike the other tiny-home villages, which are located in parking lots, the Alexandria village has retained its parklike attributes, including large mature shade trees, which this morning’s speakers mentioned several times. L.A. city councilmember Paul Krekorian said this project would serve as a citywide model for turning a public space that had been a “significant problem” into housing solutions. “This was a community park that couldn’t be used by the surrounding neighborhood because of the state that it was in,” he said. “And we’re changing that today.”

On the other side of a nine-foot chain-link fence threaded with white privacy tape, Michelle had been using Alexandria Park as a place to live, along with a community of a few dozen other people, when she started seeing city crews coming through earlier this year. “We noticed them putting flags, different colored flags, on the lawn,” she said. “My fiancé does construction, so he was like, ‘Oh, they’re mapping out the gas and water lines.’” A few weeks later, homeless-outreach workers came by the park, putting people who lived there on a list for one of the future homes. Michelle and her fiancé (she jokes that they’re known as the “Jackie and JFK” of the camp) signed up for a tour, got information about the restrictions they would have to agree to for entry, and were shown a video of the first tiny-home site. Although the houses seemed small — “I just learned they’re smaller than a jail cell,” she said — she was willing to give it a chance and received a move-in date of May 2. “I don’t really mind the rules that they have. It’s just that I have a lot of shit,” she said. “And to only be able to bring in, you know, two trash bags?” She waved her hands at three wheeled carts stacked high with suitcases. READ MORE HERE.